Interview with Sergio Silveira, author of The Secret of Ravelston 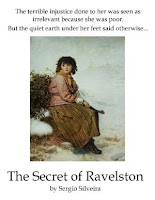 Hey everyone! As some of you may have read, a few days ago I reviewed the historical mystery novel The Secret of Ravelston by Sergio Silveira. Well, if you enjoyed my review then you will love my interview with its author Sergio Silveira! It’s a really interesting insight into what Sergio’s inspiration behind the novel was and why he decided it to be based in England during the 19th Century. I hope you all enjoy!

1. What inspired you to write The Secret of Ravelston?

I was inspired by one single poem, written by a rather unknown, albeit important poet called Sydney Dobell, an English Victorian poet, member of the "spasmodic school" of poets--yes, what a title, isn't it!

I heard "The Ballad of Keith of Ravelston" several years ago at The Art of Poetry Class, a wonderful class given in NYC at the Aesthetic Realism Foundation, and I was simply swept by it.  In his poem, Dobell tells that a great injustice was done to a young woman, but because she was poor no one cared about what happened to her.  But something happens to the place where that injustice took place that it can never be ignored.  I was deeply moved by the idea that an injustice done to a poor person couldn't be pushed away, ignored, having grown up in a developing country where so many terrible things were done to poor people, and it was seen as irrelevant.

2. How much of the book was based from your own experience growing up in Brazil in the 1960’s and how much of the book is the work of fiction. Was the relationship between the rich and poor as you explained it in the book the same as it was in Brazil? Or was it based more on historical sources from the 19th Century?

Although my novel takes place in the United Kingdom of 1805, so much of it are moments of my own life, growing up in the 60's and 70's in the northeast of Brazil.  I grew up in a society very much alike that of early 19th century Europe, in which wealthy, aristocratic landowning families lived in great luxury, at the expense of a vast majority of impoverished people.  Most of these wealthy land owners lived far away from their large estates, sometimes rarely visiting them.  Meanwhile, ever so many destitute human beings spent their entire lives toiling in those vast estates producing the large wealth the absent land lords enjoyed.  That's so much in my book, as in the case of Mr.Hemmings, who hadn't visited his vast ancestral estate in 30 years, but felt he was exclusively responsible for the creation of the estate's great wealth because of his diligent correspondence to the estate's managers, every other month.

Yet the main thing in common with the UK of 1805 and the northeast of Brazil in the 60's and 70's is actually a way of seeing people, and particularly a way of seeing the poor people, which enabled those living in wealth to justify their injustice.  This, I only learned later in my life, and in the US, from a great education called Aesthetic Realism, founded in 1941 by American poet and critic, Eli Siegel.  It is contempt, and which I had, growing up in one of those wealthy and old land owning families.  I remember as a young child, realizing that so many poor children died in Brazil from easily curable diseases, and asking those around me whether poor parents suffered in seeing so many of their children die.  I was told the poor people didn't have feelings like we did.  While the death of a child would simply devastate one of us, I was told, the poor people were quite used to it, and they actually suffered very little from it.  It made me feel less guilty to believe this. This contempt, I learned, not only causes the great poverty of millions in Brazil, it also had children spend their young lives and die in industrial mills in the UK of 1805.  One great question I heard studying Aesthetic Realism began to fundamentally change my terribly unjust way of seeing people: "Do you think poor people are more like or different from you?" I had been so sure they were completely different, and inferior, to me.  When I began to realize that they had feelings, and hopes and fears just like I had, the thought of a parent being unable to buy the medicine a child desperately needs, of even food, became simply unbearable to me. Lord Andrew, with all his sarcasm and anger, is actually a better person than I was growing up in Brazil, for he is deeply bothered by the injustice he sees, he feels it's unjust.  Yet he is torn between this beautiful feeling, and what he sees as being loyal to his family.

3. I felt Jane Freemont was a very likeable character and I would love to read more of her. Have you ever considered making her into a historical mystery heroine and having a number of books based around her solving mysteries?

My next adventure for Jane is in the works.  It will be called The Mirror Lies, and it's about how the thirst we all have for flattery can take us away from everything that is true and just.

4. As a historical mystery writer, what other authors do you enjoy reading?

I enjoy the classics more than anything else: George Eliot's Middlemarch, Charlotte Bronte's Jane Eyre, Henry James' Portrait of a Lady, Jane Austen's Pride and Prejudice, and I love Agatha Christie's mysteries.  Yes, I confess, I love everything British, and I am damn proud of it!  How, otherwise, would a Brazilian lad ever write a British period novel?!

5. So what is next for Sergio Silveira? Are there any other novels in the pipeline, if so could you give us a brief synopsis of what it’s going to be about?

In The Mirror Lies, Jane is again sent far away by her brother, and she discovers that a large hallway mirror is actually an entry to a place where all we wonderful things we yearn to be--beautiful, charming, witty, adored--become true.  But there is a terrible price for it.

6. And finally. As a self-published author is there any advice you would give to writers who are trying to get their work out there?

The first advice is, get a good editor.  Second, look for reviewers who like your genre.  Third, and most importantly, you must never stop believing on the value of what you wrote.

P.S. Don’t forget to enter my Book of the Month Competition for your chance to win a FREE copy of 1984 by George Orwell. To enter, just follow the instructions on the widget below and for more information click here.

a Rafflecopter giveaway
Posted by adam-p-reviews at 12:54