Hey everyone! Here's my first ever guest post! The post is written by Simon Acland the author of The Waste Land, a Grail Quest story with a bit of a twist! Here's a short synopsis of the book from Goodreads: 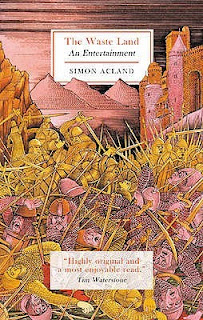 The Waste Land chronicles the adventures of Hugh de Verdon, monk turned knight, during the extraordinary historical events of the First Crusade. He journeys from the great Benedictine monastery of Cluny to Constantinople, Antioch and Jerusalem. He encounters the Assassins, endures a personal epiphany and discovers the ‘truth’ behind the Holy Grail.

Hugh de Verdon’s tale is retold by a group of desperate Oxford professors, based on his autobiographical manuscript, discovered in their College library. Their humorous - and murderous story also provides a commentary on the eleventh century events and shows that they are perhaps not all they seem.


In his guest post, Simon writes about his experience in researching and writing The Waste Land. I hope you enjoy!

“So are you a historian then?”

That’s the first thing many people ask me when I tell them I have written a novel set in the First Crusade. When I say, “No, a modern linguist actually”, and that my inspiration came from studying the 12th and 13th Century Grail Romances, they normally say “Wow, you must have done a lot of research.”

At that point I feel a bit of a fraud. To me, research implies toiling in libraries among dusty documents, written in ancient languages in indecipherable script. For me it was much easier than that.

Because the First Crusade is such an extraordinary period of history, and occurred at a pivotal point as Europe was making the transition from the Dark Ages to medieval times, there is a wealth of good books about it. The modern Granddaddy is Stephen Runciman’s  A History of the Crusades (Cambridge 1951), but has been followed by many other distinguished works. The main historians other than Runciman on whom I relied are Jonathan Riley-Smith, Christopher Tyerman, and Thomas Ashridge. And I was able to find some specialist works, for example about Cluny, the great Benedictine Monastery where my hero Hugh de Verdon starts his journey, about the fabric of the City of Jerusalem, and the intricacies of medieval warfare.

For the novelist it is also fortunate that many of the contemporary chronicles are available in print and in translation. These fascinating texts were mostly written by monks who accompanied the leaders of the Crusades to the Holy Land. They tend to support the image and reputation of the individual leader in whose entourage the authors travelled, for the prominent Crusaders were always at each others’ throats. But texts such as the Gesta Francorum, the Gesta Tancredi, and the Historia Hierosolimitana provide an invaluable direct insight to the way the Crusaders thought.

The picture would not be complete without the Muslim point of view, especially because the Arab world was far more civilised, tolerant and advanced than Christendom at the end of the 11th Century. Ibn al-Athir is the most distinguished near contemporary Arab historian, and there are several useful summaries of his and others’ work such as Francesco Gabrieli’s 1957 Arab Historians of the Crusades. Then Usama ibn-Munqidh wrote a delightful diary about his life, starting early in the 12th Century, published as An Arab-Syrian Gentleman and Warrior in the Period of the Crusades. Although it postdates the First Crusade itself, and so does not provide any information about the events themselves, it shows the Arab life at the time and the barbarism of their Christian attackers.

A third perspective is provided by the Alexiad, the biography of her father written by Anna Comnenos, the daughter of the contemporary Byzantine Emperor Alexios I. She also shows the Crusaders in fairly uncivilised light, although she clearly fancied Bohemond of Taranto!

So the lucky novelist is spoiled for choice. Partly because of this, and unusually for a novel, I did include a bibliography of the works I found most useful at the end of my book. A word of warning, though. It is not just an academic bibliography. You may be surprised to find references to adventure classics such as John Buchan’s Greenmantle and Henry Rider Haggard’s King Solomon’s Mines. This is because there are a couple of episodes in The Waste Land that pay homage to these books. And you may be surprised to see Monty Python and the Holy Grail included on the list. Well, see if you can spot the knight who says “Ni” in The Waste Land! Or watch my video at http://www.meettheauthor.co.uk/bookbites/1915.html, and then you will understand!

ABOUT SIMON ACLAND
Simon Acland worked as a venture capitalist for over 20 years and wrote several books on investing and leadership. The Waste Land is his first novel. For more information, visit his website at :http://www.simonacland.com/wasteland.htm

My review of Simon's book, The Waste Land will be posted tomorrow :) 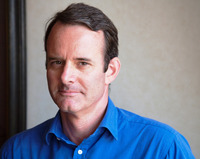