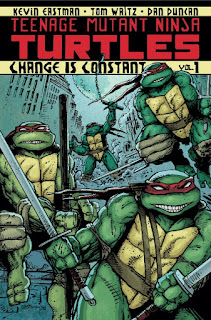 I decided to give this comic book series a try as I was such a huge fan of the Teenage Mutant Ninja Turtles TV show when I was a kid. Plus, the fact that a new TMNT video game is getting released in a few weeks also swayed me to pick up these comics. This is because one of the lead artists on the game also worked on the comic books. As the game looks amazing, I thought I’d love the comics too.

Unfortunately this wasn’t the case. The art style in the video game was very bright and easy to look at and enjoy, whereas I found the comics to be almost monochrome, limited to blacks, greens and reds. It gives the art style of the comic a much more grown up feel, which it could be argued is the comic’s target audience as most of its reader would have grown up with the Turtles as kids (like me). However, I felt it was too harsh for me because the limited colour pallet didn’t distinguish each individual tile of artwork from one and other. This led me to mostly just read the text in the book and not look at the corresponding pictures because I enjoyed the story more than the artwork.

The story is the origin story of the Turtles and their master Splinter. Though some parts of the story were ridiculous; like Splinter (as a rat and not a mutant) defeating two Ninjas as they try and steal the Turtles, I still thought it was very original and more dynamic than the original origin stories from the TV show and numerous movies following it. The loss of Raphael was interesting and used well as it gave the writers a chance to introduce other key characters in the series, which I thought was an refreshing sub-plot and really enjoyed.

I won’t be continuing this series as I feel it’s not for me. However, if you are a TMNT fan I think you should give Vol 1 a try, as it is quite short and actually has an ending where you can walk away from the series feeling content.