Hank Quense is back with another hysterical Strange Worlds novel! In this latest addition, Hank uses his wit and humour to tell the story of some of England’s most famous folk tales. Stories such as the Knights of the Round Table and Robin Hood feature heavily in this very tongue-in-cheek parody.


The book follows three main stories which all become intertwined. The lead story is that of Moxie, a Princess of a minor Kingdom. Sadly unlike most fairy tale princesses, Moxie was not blessed with good looks or charm. Her father is desperate to get her married so she can produce an heir but because of her looks he is unable to find a suitor. Luckily, a petty Count from the north of England agrees to marry Moxie and her Father organises a patrol of Knights from the famous Knights of the Round Table (KRT) to accompany her on her travels.


The second tale is that of Percivale, Gareth and Bors. The trio have just graduated from the Heroes Guild and have landed their dream position of being apprentice Knights of the Round Table. They can’t wait to make their fortune by saving maidens and slaying dragons. However, to start with they must accompany Princess Moxie on her journey to her new husband. The Knights believe this task to be easy but the stubborn and unfriendly nature of Moxie means their work is cut out for them.


Finally, King Artie has managed to carve out a Kingdom for himself on the southern shores of England. After pushing marauding Saxons back into the sea, his small Kingdom of Camelot has become extremely prosperous and his Knights of the Round Table are renowned throughout Britain. However, Artie did not win his Kingdom through epic battles with the Saxons but instead through epic football games against them. Artie knows as spring approaches the Saxons will return for another go at the Brits. With his Knights drinking and sleeping most of the winter, Artie must come up with a new tactic to beat the Saxons once and for all on the football pitch! 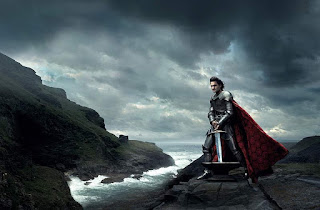 I really enjoyed this novel. It was an extremely fun and tongue-in-cheek twist on many of England’s famous fairy-tales and folk stories. I loved the fact the armies didn’t fight battles against each other but played games of football instead on the ‘field of honour’. I thought this was a great twist Quense used to redefine these age old stories and fit them into the unusualness of his Strange World series.


Though I did enjoy the book, I did have one issue with it.  I thought that Hank switched between the stories a little too often. One example of this was that he tells the story of Artie and Lancelot in the present tense and then tells a very similar story about them from 435 C.E. (15 years before). I sometimes found it very confusing to distinguish which tale I was reading about!


All in all, I really liked this book and read it in a couple of days! If you like the Discworld novels by Terry Practhett I think you’d really like this novel and the others in Hank’s Strange World series. I think both authors get the same amount of silliness and strangeness in their books which for me makes them a joy to read!
For author's official website click here.