After reading American Sniper I had a keen interest in military memoirs and really wanted to read more books from that genre. Being British, I wanted to see if there was a difference between the psyche of an American soldier and a British one. I knew that there are two really famous British army memoirs, one of which is The Bridge Over the River Kwai. Although I’d love to read this book, I wanted something a little more similar to American Sniper which left me with Bravo Two Zero by Andy McNab. I’m not going to say too much about the book because I don’t want to spoil it for you, but be assured it is an infectious read with a lot of sad and gruesome parts!


As I said above, this book is immensely well known in the UK and was first published in 1991 and has being republished many times since then. The memoir follows SAS (Special Air Service) soldier Andy McNab as he leads his team into an undercover, behind enemy lines operation in the First Gulf War against Iraq in 1990. Their mission is to cut an important communication line between Baghdad and Eastern Iraq where Saddam holds most of his infamous SCUD missiles. 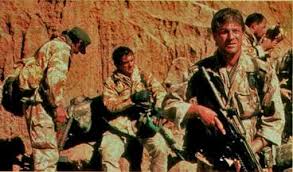 Sean Bean playing McNab in TV show
The mission is clinically planned as every SAS mission is but when unusual weather and a lot of bad luck occur the team are compromised and have to escape Iraq into Syria. Unfortunately, Andy doesn’t make it and is captured by the Iraqis along with two of his friends. What follows is weeks of brutal torture and mistreatment at the hands of the Iraqis before the end of the war. Their job is to break the British soldiers and make them reveal their secrets. But with rigorous training and a strong sense of will, how long can the British soldiers last before their nightmare becomes too much?


This was a vastly interesting book telling an awful but very inspirational story. It gives an insight into the very secretive SAS, Britain’s most highly trained and famous part of the army. I especially liked how honest McNab was about his ordeal and how he doesn’t let his torture define him. As he says, this is what he is paid to do and what he trains for. This comforting though helps give him the will to get through the weeks he spent in an Iraqi jail.


I did enjoy Bravo Two Zero more than American Sniper. I know most of you will say it’s biased because I’m British (and I guess I kind of am!) but the nature of the SAS means that even people who have left the force must remain anonymous which means McNab does not reveal too much about his personal life. Whereas in American Sniper I believe the publisher tried to make Chris Kyle a hero by not just revealing his deeds in Iraq, but by telling more of his personal story and making him the guy everyone would love to buy a beer and pat on the back.


Another great military memoir, the next one I read will definitely be Marcus Luttrell’s Lone Survivor!
For author's official website please click here