I bought this book on the day of its release and was extremely eager to get stuck into it because the first book in the series, Hannibal: Enemy of Rome was so good!

However, two years later I still hadn’t started and became determined to get re-emerged in this series. Now that I work a pretty boring job, I found the time to be able to finally get through the novel and that was by downloading the audiobook. I’m extremely glad I did because I was gripped by this book from the very start and ended up finishing the 16 hour long audiobook in two days!
As I said above, this book is the second in Ben Kane’s Hannibal series and is set a few months after the end of the previous novel. The plot follows three main characters: Hanno a Carthaginian, Quintus a Roman Cavalryman and Aurelia, Quintus’s sister. Quintus is part of the defeated and quite frankly embarrassed Roman Army dogging the footstep of the infamous enemy of Rome- Hannibal.
After being overpowered at the River Trebia, the Roman Cavalry is licking its wounds and its hurt pride. After a stupid hunting incident, Quintus is ordered to return home by his father in shame. Being the patriotic Roman, Quintus decides to defy his father’s orders and enlist in the Roman infantry as a Velites, the lowest form of soldier in the army. Having been in the infantry a few hours, Quintus learns that it is not as easy or as civilised as the life of a cavalryman. Adjusting quickly to his new role and to new enemies, Quintus must prepare for the greatest battle in Roman history, the Battle of Cannae. 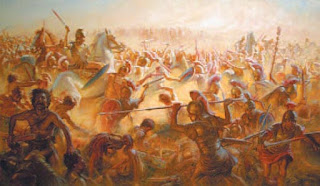 Painting of the carnage at Cannae
Hanno is an infantry officer in the Carthaginian army and is currently out of favour with his general Hannibal. After releasing his old friend Quintus at the River Trebia, Hanno is desperate to show his worth to his general. On a scouting expedition Hanno is captured and tortured by the Romans, igniting a flame of hatred for Carthage’s oldest enemy that can only be quenched by Roman blood. However, there is one Roman he would love to meet again and that is Quintus’s sister Aurelia. As the Carthaginian army passes Capua, a chance encounter with Aurelia causes Hanno to look at his life differently.
Missing her brother and father (and Hanno) terribly, Aurelia is in despair as news from the battle at Trebia is slow to reach her farm in the Italian countryside. Because of the lack of news, her father’s debtors come knocking and Aurelia is force to marry a rich Roman noble to pay the debts. After her meeting with Hanno she falls even deeper into depression, dreaming of a life that might have been if the war never happened.


Ben's video of the Cannae Battlefield
This book was great, even listening to the audiobook I was absolutely staggered at the amount of detail Kane puts into the book. His description of the hierarchy in the Roman army and the battlefield of Cannae make the events of the battle so real, making you feel the horror of the soldiers who were trapped so perfectly in Hannibal’s web. In addition, I loved the change of fate Quintus has in the book. If any of you have read my other reviews, you’ll know I love a zero-to-hero protagonist. Putting Quintus in the Velites fills that role perfectly for me as I didn’t find him that interesting of a character until then.
This was a great historical novel and I loved every minute of listening to Michael Praed read the story! I’d suggest this book to anyone who likes other authors such as Simon Scarrow and Anthony Riches. I just downloaded the audiobook for Hannibal: Clouds of War and can’t wait to listen to it!