The Liar’s Key is the second book in the Red Queen’s War series by epic fantasy author Mark Lawrence. The novel follows on from the tale in Prince of Fools as Jalan and his companion Snorri emerge from the Bitter Ice with Loki’s key, a key that can open any lock.
With the murder of his family, Snorri plans to take the key and head south in the hopes of finding the door to Hell. With the magical key, Snorri plans to open Hell’s door and be reunited with his murdered loved ones. Jalan too is eager to head south but with very different goals to Snorri. Jal intends to take the key to his Grandmother the Queen of Red March and her Silent Sister. As usual, Jal is thinking of himself and hopes the gift of the key will raise him in his Grandmother’s esteem, possibly even to the position of becoming her heir. Plus with the cold, dour weather of the far north, Jal is keen to return to the luxuries of his palace and the many comforts of the women in his Grandmother’s Kingdom.
With the help of an apprentice Volva (witch) called Kara and one of Snorri’s old friends Tuttugu, the companions sail south to reach the great continent. However their passage is not easy. Their old enemy Edris Dean peruses them for the Dead King and tries to retrieve Loki’s key. The Dead King also craves the key to open Hell’s door and unleash his undead army into the Broken Empire to seize control and reign supreme. The friends must outthink Dean and stop themselves becoming too engrossed in the battle between the Light and the Dark to take the key and open Hell’s door.
The Liar’s Key was a very enjoyable read from one of my favourite authors. I especially liked that Lawrence is expanding the Broken Empire and taking us to places we have not yet visited with whole new characters. Places such as the banking capital of Florence with its mechanical soldiers and the eerie no-mans-land of the Wheel of Osheim expand his mythical and incredibly clever universe. 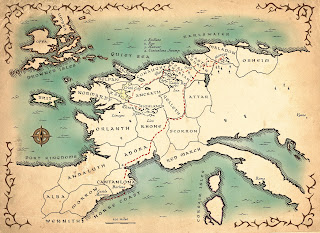 The Broken Empire... looks familiar don't you think?
In addition, I like how Jalan’s character is developing. Much like Jorg from Lawrence’s Broken Empire series, Jalan has some very deep and disturbing character flaws. However, where Jorg’s flaws became deeper and darker, Jalan’s seem to become much more humane. He starts to gain a conscience and think about other people’s feelings, even though it pains him to do so. I like that this distinguishes Jalan from Jorg because I was starting to feel that their stories were becoming a little similar. Both of their Mothers were killed when they were young and both of them seem to have issues with their siblings. Plus, both princes crave power but go about getting it in different ways.
Perhaps this is how Lawrence intends it to be and that these links will mean something very significant in future novels or series? However, at the start of The Liar’s Key it felt like the same protagonist with the same past, but with a different story and this disappointed me at first. Nevertheless, as the novel went on, Jalan's story and past became unique making me enjoy reading about him and want to know more about his family's past.
If you like Lawrence’s other novels definitely pick up The Liar’s Key because after a few chapters you won’t be able to put it down and the ending paragraph is hilarious! Though if you have not read any of his other books, I would suggest you start with the Prince of Thorns to get into the world of the Broken Empire. In addition, if you’re a fan of George R. R. Martin or of novels such as The Name of the Wind by Patrick Rothfuss, you will love this book and Mark Lawrence.
For author's official website please click here.
Or for Mark's blog here.
Posted by adam-p-reviews at 10:19