George R.R. Martin Rewards Readers with New Twist in The Winds of Winter!

Today IGN posted an interview with A Song of Ice and Fire’s author George R. R. Martin, who everyone knows is the author of A Game of Thrones which the hugely popular TV series is based on.

Though the new book The Winds of Winter won’t be released until after Season 6 of the show is aired, the new novel won’t be totally spoiled by the TV show! In his interview with IGN, Martin explains that he has taken his own artistic license to deviate from the plot of the show and add a new twist to his novel; explaining that he will reintroduce a character that is dead in the show but not dead in his books! This new change in The Winds of Winter will give an answer to the question ‘why would you read the book when you can watch the TV show?’ It shows that though it may be easier to watch something than to read something, Martin is giving his loyal fans, some of whom have read the series for over 30 years, something to look forward to. I think that this nod to his fans needed to happen as many book lovers were starting to feel left behind (myself included). 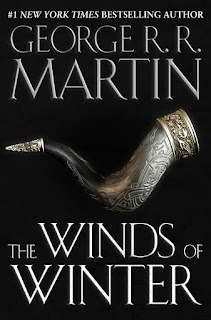 For anyone that doesn’t know, Martin’s books are massive and go well into the hundreds and sometimes thousands of pages. So much so that two of them had to be split up into two parts because they were deemed too long. I read the first five books back-to-back and it took me months to finish them and like everybody else, I’ve been waiting a good five years for a new one to be released! So then to be told that the show will out pace the books really annoyed me, because it made me feel like I was being punished for taking the time to read the novels. However, knowing that Martin will add extra plot lines and maybe even different characters to his next novel is extremely exciting and takes away the bitter taste I had in my mouth about the TV series.

Now I am looking forward to reading The Winds of Winter and catching up with Season 5; even though I heard it wasn’t that great! Nonetheless, I will still wait to watch Season 6 until after I’ve finished the new book! Just in case there are spoilers!

What do you think of this development in A Game of Thrones? Are you like me and a long-time fan of the books and annoyed that TV audiences are given priority over book lovers? Or are you a TV fan and just happy that you’ll be getting the next installment of this epic series? Plus, who do you think this mysterious character will be? Let me know in the comments below or head over to my Facebook channel.