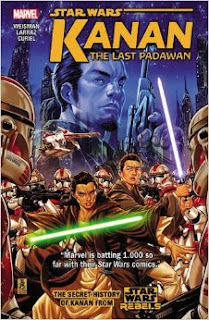 As some of you may know, I am a massive Star Wars nerd. I love all the movies, books, video games and TV series that have been spin-offs from George Lucas’s original trilogy.

When The Force Awakens launched in cinemas at the end of 2015, I spent many months prior to the release date trying to get myself pumped for the new chapter in the Star Wars story. Ingesting anything Star Wars, I came across the animated series Rebels which is shown on the Disney XD TV channel.

The series is based around a young boy called Ezra who accidently learns that he can use the Force. In his adventures Ezra meets a smuggler called Kanan who later turns out to be an exiled Jedi. Kanan takes Ezra on as his Padawan learner and tries to teach him the ways of the Force. However, it is clear in the TV show that Kanan has some sort of dark and mysterious past as he struggles to be the mentor Ezra needs.

Kanan intrigued me as a character in the show. Firstly, he looks bad ass and secondly, the hints towards his past made me do some further research to try and discover more about this troubled Jedi.

In doing research I was pleasantly surprised to find that an entire comic book series had been dedicated to Kanan and his days as a young Padawan. The series is called Star Wars, Kanan The Last Padawan and issue 1 was released in April 2015. Since then, issues have been released on a monthly bases and a Volume 1 (a collection of the first six comics) was released in November 2015.

Finding out there was a comic book series about Kanan really excited me because I’ve wanted to get into comic books for such a long time and never really knew where to start! The oversaturation of Marvel and DC Superhero movies put me off trying any of those comics, as there seems to be loads of different series of those comics too. However, when I learned there was some recent Star Wars comics in circulation, I thought this might be the time to dip my toe into the comic book world!

So at the weekend I headed down to my local comic book store and picked up Volume 1! I read the whole book in one night; the story was so good! It tells the tale of Kanan as a young Padawan under the guidance of Jedi Depa Billaba on the planet of Kaller. The Jedi and Clone Army have liberated the planet from the iron grip of the Separatists and Kanan is enjoying his victory. However, when his friends Captain Styles and Commander Grey receive order sixty six from the newly crown Emperor, Kanan’s sheltered life as a Jedi apprentice is soon cut short.

Kanan manages to escape with his life as Depa Billaba sacrifices herself to save the young Padawan. He finds himself alone in Kaller’s capital city, scrounging for food and trying to keep a low profile as he plans to escapes the planet. As always, the Force works in mysterious ways and leads Kanan to a smuggler and rogue called Janus, who takes the starving and scared child under his wing. The former Padawan thinks he can get on with his new life and though he has disappeared, his two old friends Styles and Grey are still on the hunt for the young Jedi traitor that got away…

This comic was everything I wanted; it told a compelling story about a character who I thought was interesting but knew would never get a movie or TV series of his own. In addition, the artwork was beautiful and I felt there was an almost Anime feel to Pepe Larraz’s and Jacapo Camagni’s art which I really appreciated. The colourist David Curiel made his art very dark and grungy, using lots of browns and oranges which I think added an atmosphere to Greg Weisman’s writing; helping show Kanan’s distress at losing his master and starting a new life.

I really enjoyed reading this comic and I am looking forward to picking up the other editions in the series that have been released. I hope my review was ok, it’s my first one so please be kind! I don’t know that much about art or comic book artists, but approached this review as I would any other book review and gave my honest opinion!

If you are an avid comic book reader please suggest some series to me, I would love to get into more obscure comics, as I assume any Star Wars comic is pretty popular!