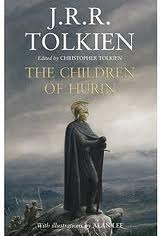 Publisher: HarperCollins
Pages: 336
Main Characters:
Hurin, Turin, Nienor, Morgoth,
The Children of Hurin is one of J. R. R. Tolkien’s less known works. Parts of the manuscript for the book were written in the 1910’s by Tolkien, but the story of the Children of Hurin was never published as a book in its own right before Tolkien’s death. However in 2007 his son Christopher finished the story by using Tolkien’s original notes and with illustrations by Alan Lee, the artist form  other famous Tolkien book such as The Lord of the Rings.


The novel follows the story of Turin Turamber, the heir of House Hador. Turin’s life is ruled by a curse put on his father by the evil lord Morgoth. The curse sees Turin's life change from been an heir to a noble House, to becoming an Elven Prince to finally an outlaw. It sees him change from a small boy, to a man, a murderer and a warrior, whilst seeing him love and grieve. The novel is set in Middle-Earth thousands of years before the War of the Ring. The North is ruled by Morgoth and his Orcs, whilst in the South Men and Elves alike try to stop his evil spreading.
For me this book is like Tolkien’s Romeo and Juliet.  The book is a tragedy, following two people who are deeply in love but have no right to be. It is a brilliant book to read. The story of Hurin’s family is heart wrenching. All the way through the book you see the curse becoming worse and worse for Turin, but he believes his life is getting better. The ending is also a shock, all the way through the book you know something terrible will happen, but I did not expect what happens in the end. Unlike some other Tolkien books it is also not hard to understand which I think makes it a perfect first time Tolkien read for younger people. I read it for the first time when I was fifteen and found it brilliant.
The book is also great for Lord of the Rings and The Hobbit fans. It gives a great look into the way Middle-Earth was before the War of the Ring and helps give a background and history to the Lord of the Rings. It is a great read, with brilliant illustrations by Alan Lee and would be a perfect book for any Lord of the Rings fans.
Posted by adam-p-reviews at 08:22