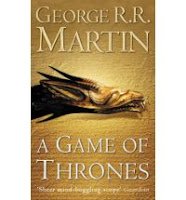 Before my review I would like to take the time to tell you where I stand on reading books that have become films or TV series. I always prefer to watch the film or TV series first. I think it helps give me a clear idea of what the characters in the book look and sound like. I know some people may totally disagree with me, saying the film or TV series does not totally follow the book or is overly dramatized or sexed up to gain TV viewers. However in the case of A Game of Thrones, I thought the TV series did the book justice and kept as true as to the novel as possible. This is because the book is written in a way that each chapter is like a scene in a film. It switches between characters and places and is why I think A Game of Thrones TV series worked so well. The TV series even uses most of the dialogue of the book, plus the actors in the show are so well suited to their roles, especially Sean Bean as Ned Stark.
Ok, so that’s my stand on whether to read the book first or watch the TV series. A Game of Thrones is the first book of George R. R. Martins A Song of Ice and Fire series. The book itself follows three different story lines. First it follows the story of the Stark family and their lives in Kings Landing and the rest of Westeros. This branch of the book follows Eddard Stark as he becomes the King’s Hand, whilst also following the tales of his two daughters Arya and Sansa.  The second story follows Jon Snow, a bastard born son of Eddard Stark. Jon’s story sees him becoming a member of the Nights Watch, an ancient brotherhood that guards the Kingdom of Westeros from the barbaric Wildings. The third story is of Daenerys Targaryean. It follows her through the Nine Free Cities and her marriage to Drogo, the Khal of the Dothraki. It starts the campaign of Daenerys and her attempts to regain the Iron Throne in Westeros.
As I said above, the chapters in the book are written like scenes of a film. Each chapter is specific to a character in the book which makes the book very exciting to read. This is because once you finish a chapter on one character you just want to read on until you get back to a chapter on them again. For me this was the story of Daenerys, but all of the characters stories are equally exciting and brilliantly crafted by Martin. Martin’s detail in the book is extraordinary.  His history of Westeros can be followed back for thousands of years and helps bring his world to life. It makes you believe that Westeros could have been a real place somewhere in the world because its history and characters are so detailed. However, in some parts of the book this does get confusing. Especially when characters have the same or similar names. It is confusing because you’re not sure if the story is about the present character or the one in the past.  But all in all, the detail does really benefit the book and brings it to life.
Martin’s style is also very refreshing. Many books I’ve read have been very predictable and follow set lines where the goodies always win. However this is not so in A Game of Thrones. Martin coaxes you into believing that you know where the story will go. Then totally slaps you in the face with a death or a betrayal. Again this makes the book brilliant to read because you don’t know what could happen next. It keeps you on the edge of your seat because it is totally different to any other books with typical foundations. For me it was a great read and I would recommend it to anyone who is in to fantasy books like the Lord of the Rings. I’d also say that even if you have watched the TV series still read this book because it is that good and it is a joy to read.