Master of Sanctity is the second novel in Gav Thorpe’s epic The Legacy of Caliban trilogy. The book picks up after the first novel Ravenwing and follows the fate of three different Space Marines in the secretive Dark Angels chapter.
The first tale is that of Sapphon the newly chosen Master of Sanctity. Sapphon’s primary duty is to find and reform ‘The Fallen’, a group of ancient Space Marines that turned on their patriarch and their Emperor centuries before. Sapphon’s approach is unorthodox for a Dark Angels Chaplain as he uses his cunning to find and eliminate the traitor Space Marines. This is shown in his attempt to manipulate the 'Fallen' Astelan in the hopes of capturing even more powerful and corrupt soldiers. However, his task is made harder by his brother-in-arms Interrogator-Chaplain Asmodai whom contradicts Sapphon’s methods instead believing in older, more violent methods of manipulation.
Telemenus has being promoted high within the Dark Angels to the Death Squad, a group of elite Terminators who are the tip of the spear of the Dark Angels when hunting for Fallen. Telemenus has to adapt to his new armour and brothers as a member of the First Company of Dark Angels. As well as this, he has to overcome his own doubt in his abilities and his chapter to become the elite warrior everyone expects him to be. The new Terminator must do this quickly to assist the Master of Sanctity in his hunt for the fallen Space Marines! 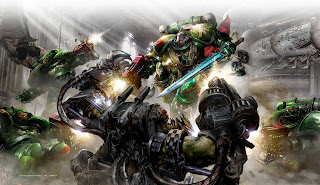 I love the artwork from these books!
﻿
Finally, Annael was the prominent character in Ravenwing and at the start of this novel is also promoted to Black Knight in the infamous motor cycle detachment of the Dark Angels. Having been promoted, Annael is introduced to horrific secrets from the Dark Angels’ past and has to evolve into his new role as one of Master Sammael’s chosen warriors.
Much like Thorpe’s other Dark Angels novels, this book blew my mind! From the first page I was hooked on the hunt for the Fallen and absolutely loved the character of Sapphon. His cunning and ingenuity really distinguishes him from other characters in the book making him unique in comparison to other Space Marines who shoot first and ask questions later. For me, this made his story the most enjoyable to read because he has to use trickery, lies and deceit to win over his more traditional Brothers.
As the reviewer from SFX states; Thorpe makes his characters ‘actually sound like real people’. I’d absolutely agree with this because he gives the Space Marines real problems like doubt and self-consciousness, which you wouldn’t expect a genetically modified super-soldier to have.
I thought Thorpe did an excellent job of describing the worlds on which the Space Marines visit, especially the world of Ulthor. However, I do kind of question why the story of Ulthor was in the book as it seemed to move away from the plot and in some respects seemed a little pointless. I thought what happens there was exciting and well written but if it hadn’t been in the book, I don’t think the story would be any worse off.
All in all this was a great read. Some people give a little giggle when you tell them you’re reading a Warhammer 40K novel. Nevertheless, I can honestly say they are some of my favourite Sci-fi reads and people who love Sci-fi should definitely check out The Legacy of Caliban trilogy!
For author's official website click here