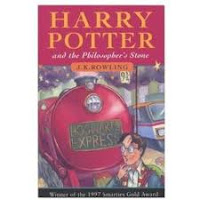 Publishers: Bloomsbury
Pages: 223 (Paperback 2010)
Main Characters:
Harry Potter, Ron Weasley, Hermione Granger
Harry Potter and the Philosopher’s Stone is a great book. I’m not really going to say what this book was about because most people will have seen the film and already know what the plot is. As I’ve said in some of my older posts, I prefer to watch the films before I read the books because it helps give me an idea of what the characters look and sound like.
The book for me was great. I really liked the films but I think the books really put meat on the bones because they have so much extra detail. I also was abit hesitant to read the books because I knew that they were originally aimed at younger people. Even though this is the case, I still found the book exciting and even shed a tear at a touching moment at the end. It was a great book and I would say if you have seen the films you should defiantly read the books.
For Link to others official web-site:
http://www.jkrowling.com/en/
Posted by adam-p-reviews at 11:47