Now Then Lad, The Tales of a Country Bobby, Mike Pannett 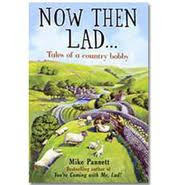 Publishers: Constable
Pages: 258
Main Characters:
Mike Pannett
Now Then Lad…Tales of a Country Bobby is the very interesting and funny book by Mike Pannett. Now Then Lad is based on the true story of Pannett. It tells the tale of Pannett as he moves from his busy, dangerous job as a Metropolitan Police officer, to a rural bobby in his home county of North Yorkshire.
The book tells the tales that Mike faces as a rural bobby. Tales such as a Bullock getting lose at a Cattle market, or his role in rustling up poachers in the North Yorkshire Wolds.  It also shows the darker side of crime that happens in North Yorkshire, which as a Yorkshire lad myself, I was surprised to read about. The story also introduces you to the many different characters from North Yorkshire, from the gossiping housewives, to the ever watchful farmers and the slightly flamboyant aristocracy, again been form Yorkshire I saw similarities between these characters and people I know!
This was a great book. It was really easy for me to enjoy it because most of it is set where I grew up. For people who aren’t from Yorkshire though, it is still a great read. Pannett is very funny in the book, really telling us what a Police Officer really thinks when he has to move on a slightly tipsy crown on a Friday or Saturday night.
As a say this was a great read. I would suggest it to anyone from North Yorkshire because you will really be able to relate to the book and find the characters really funny. I would also suggest it to people who have an interest in the Police force and enjoy a good, light hearted read.
For author's offical web-site,
http://www.mikepannett.co.uk/
Posted by adam-p-reviews at 07:38