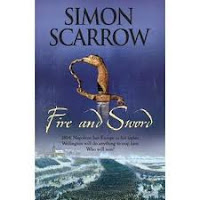 Fire and Sword is the third book of Simon Scarrow’s ‘Revolutionary Quartet’. The novel continues the story after the previous book The Generals in 1804 and follows the political and military careers of two of the best Generals ever, Napoleon Bonaparte and Arthur Wellesley (future Duke of Wellington), as both the British and the French Empires finally comes to clashes in Continental Europe.
The novel follows Napoleon as he tries to tighten his grip on the Continental Powers, Russia, Austria and Prussia. After a glorious victory at Austerlitz, Napoleon subdues the Austrians, whilst befriending Tsar Alexander of Russia and crushing Prussia.  After defeating his enemies in Europe it gives Napoleon a chance to turn his energies to defeating his greatest foes Britain and gaining peace throughout his Empire.
Meanwhile in Britain, Arthur Wellesley has returned from a triumphant campaign in Denmark where he has distinguished himself as a leader of men. Because of his efforts in Denmark, Arthur’s plan of the invasion of the Iberian Peninsula is put into action. After a failed attempt by his superiors, Arthur is given command of the Army of Portugal and starts his campaign against his greatest enemy the French.
Again like its prequels this was a great book. Full of action from battlefields, to conspiracies, to affairs this book keeps you totally entertained, making you just want to read on and on. It is also great at setting the scene for the next novel and the climax of the Battle of Waterloo.
As I said it was a great book and I would suggest it to any of you that is into the Napoleonic era. I would also suggest this book to any of you that is into the Sharpe novels by Bernard Cornwell as they are both set in the same time period.
For author’s official web-site:
http://www.scarrow.co.uk/
Posted by adam-p-reviews at 08:20