The Girl With The Dragon Tattoo, Stieg Larsson 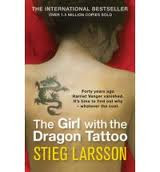 Publishers: Quercus Publishing Plc.
Pages: 542 (Paperback 2008)
Main Characters:
Mikael Blomkvist, Lisbeth Salander
The Girl with the Dragon Tattoo is the cult book sensation by the Swedish author Stieg Larsson. The first book of the Millennium Trilogy, The Girl with the Dragon Tattoo is set in modern day Sweden and follows Mikael Blomkvist, an edgy, controversial journalist who is co-owner of Millennium magazine.  Blomkvist has just been accused of libel for his report on the Industrial tycoon Hans-Erik Wennerstom.  Down on his luck and exiled from the world of journalism, Blomkvist takes an investigating job looking into the mysterious disappearance of a girl over 35 years earlier.
Whilst in his investigation for the missing girl Harriet Vagner, Blomkvist comes into contact with Lisbeth Salander, an anti-social computer genies. Working together, Blomkvist and Salander manage to look back into the Vagner family history and unearth truths about some family members which some people do not want to come to the surface, resulting in the capture of the murderer who made Harriet disappear all those years ago.
This was a very good book. Anyone who enjoys a good murder mystery will love this book. It is full of action from the very start with murder, controversy, sex and betrayal.   The book has very deep characters each with their own pasts, hope and goals. There is however some very sinister parts to the book. Larsson focuses on the issue of violence towards women in his book. The a-social Salander is the focus of this in The Girl with the Dragon Tattoo. After watching her mother nearly getting beaten to death by her father at a young age. Salander ends up in a mental institution for children. After been released in her twenties, Salander is assigned a guardian by the name of Holger Palmgren. Palmgren is a sadist who exploits his role as Salander’s guardian. This is the sinister part of the book, as Salander’s savings and rights are taken away from her. This though does add a lot to Salander’s character setting up the story line for both of the following books in the trilogy.
As I said this was a great book, it kept me on the edge of my seat all the way through.  I would suggest this book to anyone who likes murder mysteries, is into journalism or is a fan of the Niels Arden Oplev film The Girl with the Dragon Tattoo.
http://www.stieglarsson.com/
Posted by adam-p-reviews at 09:06