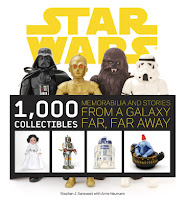 I have always been a massive fan of the Star Wars saga. They are easily my favourite films ever because they are so unique, the entire Galaxy coming from the mind of George Lucas. For a number of years I have also been a keen collector of Star Wars memorabilia, from action figures to Lego, I love Star Wars. I love the detail in the figurines and in some of the older actions figures that the toys are older than me and have been loved and played with by generations of children. This book was perfect for me, it is the bible of Star Wars memorabilia written by the biggest Star Wars collector in the world Stephen Sansweet.
The book consist of 1000 thousand of the more interesting pieces from Steve’s collection including the twelve original 3 ¾ inch action figures, a homemade AT-AT (All Terrain Armoured Transport) toy, a Bantha piñata and an Ewok costume made from rabbit skin. The collection is amazing! Steve also tells the history of each piece from where and when it was manufactured, how he came to own it and in some cases how much it is worth.
The book is in some way a history of the toy industry and how the emergence of Star Wars helped the industry evolve. One example of this is that Star Wars toys were the first to be produced at 3 ¾ instead of at the 8 or 12 inch produced previously. This was so children could put the toys in their pockets and take them wherever they went. For Keener (the people who produced the toys) it meant that accessories and vehicles could be produced at a price parents were willing to pay because they were smaller. This technique was the foundation for the modern toy market as every toy now is available to buy with an extra vehicle or accessory.
Steve’s collection also shows the creativity of Star Wars fans and how they created their own memorabilia. For example a sculpture of Yoda in a piece of drift wood, a Millennium Falcon tattoo machine and a ceramic C-3PO lamp show how Star Wars influence popular culture and had fans making their own versions of items in a Star Wars theme.
This was a truly interesting book. If you are a fan of Star Wars you should read it, I think some items in Steve’s collection would amaze even the biggest fan and the amount of memorabilia produced over the last three decades is staggering. For me though, it is nice to see that you can still walk into a shop today and buy Star Wars memorabilia and that the series is as strong now as it was in the late ‘70’s and early ‘80’s.
Official author’s website click here
Posted by adam-p-reviews at 04:29