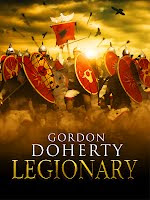 Legionary is the second novel I have read by historical fiction author Gordon Doherty. After reading Gordon’s first book Strategos, Born in the Borderlands (which I’m giving away!) and really enjoying it, I decided to give Legionary a go. Legionary is based in the western half of the Eastern Roman Empire (or what later becomes known as the Byzantine Empire) in the 4th century AD at a time when the might of Rome is diminishing and its leaders are at threat from within its very heart and from the fearsome Goths on its borders. During this political instability, the new religion of Christianity is starting to bury its roots in Constantinople and the rest of the Empire. At Christianity’s head is Bishop Evagrius, a devious old man who wants to be at the top of Byzantine rule.

In the mist of the desperate time, there is a young slave boy named Pavo who is under the rule of a cruel master- Senator Tarquitius. However, Pavo is saved from the Senator’s cruellest punishments by a prophecy whispered into the Senator’s ear by a mysterious old woman, stating that he cannot lay a hand on Pavo. After Pavo is wrongly accused of theft, Tarquitius banishes him to the depleted and pitiful Border Legions. Tarquitius knows he cannot harm Pavo but knows life expectancy in the Border Legions is only a few years. This gives Tarquitius an excuse to wash his hands of the troublesome young slave!

Freedom is strange to Pavo. He now has something to live for and looks at life in a new way. That is until he reaches Durostorum, on the Danubius River (the centre for the Border Legion’s activities) and is assigned as a recruit to the XI Claudia under the supervision of Centurion Brutus. Training is hard and Pavo is plagued by problems from his past. But he does make friends with a charismatic Thracian called Sura, who makes his time as a recruit much easier.

After his initial training, Pavo is thrown into his first campaign. But this is no normal patrol, it is an order from the Emperor himself. The XI Claudia are to march into the lost Kingdom of Bosporus and remove the Goths there, bringing it back under the control of the Empire. But, everything is not as it seems in Bosporus. Pavo’s primus pilus (Chief Centurion) Manius Atius Gallus was sent there on a reconnaissance mission and discovered a horde of unidentified riders raiding and destroying the Gothic people in Bosporus. The mission reeks of treachery but it is an order from the Emperor and must be obeyed.
What the XI Claudia discovers in Bosporus is not just a threat to them but a threat to the Empire itself. Pavo, Gallus and Sura must act quickly to prevent this mysterious horde over running the borders, whilst uncovering a traitor from within the Emperor’s court!

This was another good book from Doherty. Again like Strategos, the detail Doherty pours into the book is amazing. Describing what each type of soldier wears, where they would fight in a battle-line and with what weapons they would use makes this book so good because it is so easy to visualise the characters and their surroundings. I also thought the plot was gripping! There were not just the brilliant battle scenes to keep me entertained but the conspiracy and mystery behind the dark riders added another dimension to this book, making it more than just a typical historical-fiction book.

But, there were some parts of the book that I found a little repetitive and predictable. These often were when Pavo and Sura got into trouble, or had a dagger pointed at their throat. They always seem to be saved by some unexpected occurrence! Like a Centurion arriving, or a hidden relief force which hadn’t been addressed before. Doherty does explain after how these occurrences happened but I did find them tedious when (especially near the end) they kept happening.

Another part of this book I found confusing was the characters of Centurion Brutus and Gallus, they both seem to have the same role in the book, both play a fatherly role to Pavo, both at first despise him and both end up loving him! Which makes me think did they both need to be there?

Even though there were these small issues I did really enjoy this book and am looking forward to its prequel Viper of the North to be released later this month! I would suggest this book to anyone who is a fan of Roman history. It was interesting to read a Roman historical- fiction book based in the Eastern Roman Empire instead of been based in Rome, Britannia, Gaul or Iberia. If you would like to buy this book it is available from Amazon.co.uk or for an e-reader at Smashwords.com.

P.S. Don’t forget to enter my Book of the Month Competition for your chance to win a SIGNED copy of Strategos, Born in the Borderlands by Gordon Doherty for absolutely FREE. To enter, just follow the instructions on the widget below and for more information click here. a Rafflecopter giveaway
Posted by adam-p-reviews at 08:05