When The Eagle Hunts, Simon Scarrow 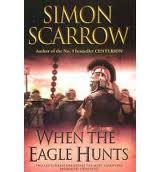 It is the winter of 44 AD and the Roman army has pushed back the indigenous tribes of the Southern Eastern coast of Britain and consolidated their gains by capturing the fort and town of Camulodunum (modern day Colchester). The leader of the Roman Legions General Plautius, feels so confident in the army’s position in Britain that he sends for his wife and children to join him at Colchester. However on their journey to join Plautius they are captured and held by the famous and terrifying Druids.

The General must save his family, it is well known all over Britain what the Druids do to their captives. But he is leading an army so he cannot go himself. To solve this problem he asks for two volunteers to locate and rescue his family. These volunteers we know very well, Marco and Cato. Will they find the General’s family in time or will they become caught as well?